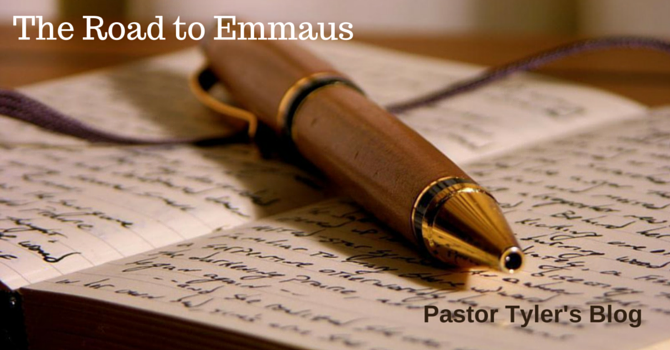 On the day of Jesus' resurrection, two disciples set out for a little town called Emmaus (Luke 24:13-35).  As they traveled, they discussed the things they had seen.  The previous week Jesus had entered Jerusalem with a king's greeting, been betrayed by one of his disciples, arrested by the Jews, rejected, and executed by the Roman governor.  Yet on that very morning, some women had gone to His tomb and returned with tales of angels and an empty grave.  What could all this mean?

As they walked, a stranger fell in stride with them and began to question them about their discussion. Whether it was their grief, their astonishment at the stranger's ignorance, or simply that God prevented them, the disciples had no clue who the man was who had joined them.  So as they walked, they told Him about Jesus the Nazarene.

As they ended with the report of the empty tomb, Jesus broke in and said, O foolish men and slow of heart to believe in all that the prophets have spoken! Was it not necessary for the Christ to suffer these things and to enter into His glory?" It wasn't the stranger but the disciples who were ignorant.

So beginning with Moses and with all the prophets, He explained to them the things concerning Himself in all the Scriptures.

The longer I study the Bible, the more I realize that the entire book points to Christ.  The Old Testament looks toward His coming, the New Testament looks back at His first coming, and all of it anticipates His return and final judgement of sin. The whole book centers on God's redemption of sinful man through Christ.  So as they pressed on towards Emmaus, Jesus opened their minds to the truths about Himself found in the Scriptures.

Peter tells us to like newborn babes, long for the pure milk of the word, so that by it you may grow in respect to salvation (1 Peter 2:2).  Encountering God through His word should set our hearts on fire, for it is in the Bible that we discover the amazing truths of the salvation God has provided through Christ.  Once we have come to understand the amazing grace God provided in Christ Jesus, we should, like a baby longing for its mother's milk, long to explore the deep truths of God's glorious grace, that we might grow in respect to our salvation.

It is my sincere prayer that these short reflections on God's word will in some small way aid the process of the word of God burning within your heart so that you might grow in the grace and knowledge of God.  Like the disciples walking the road to Emmaus, I want the truths of God to burn within my heart as I learn more and more about the glory of God my Savior.  I pray this would be the desire of all God's people.  May the word of Christ richly dwell in us (Col. 3:16).

To God be the Glory